ernestocapdevila > About the artist. > Artist Statement > THE GAME

An object, created by the hand of men in order to satisfy "human needs": a chair, a table, a frame. Pieces of stories that seem overlooked and forgotten, obtain body and form to be used. Absent of sentimentalism, materials transformed into nothing, emptiness of an object to be consumed.
Wood, precious matter which embraces life itself, reshaped into something spent; ephemeral and limited in time, subject to the speed of modern life; a simple system to fill the hollowness that does not find any permanence in anything.
This is a work of redemption, of resurrection and of relapse to the essence. In the whim of calling them "stuff", and the will to push spirituality into the dead veins of discarded furniture, they become pieces that through aesthetics return to the beginning of the cycle of life.

They appear pure and fragile, waiting to be accepted or perhaps just flirting around, embracing the perpetual space and the idea of ​​a second chance. They come alive at will and unfold arms, legs and faces excited to express and to belong to the world. 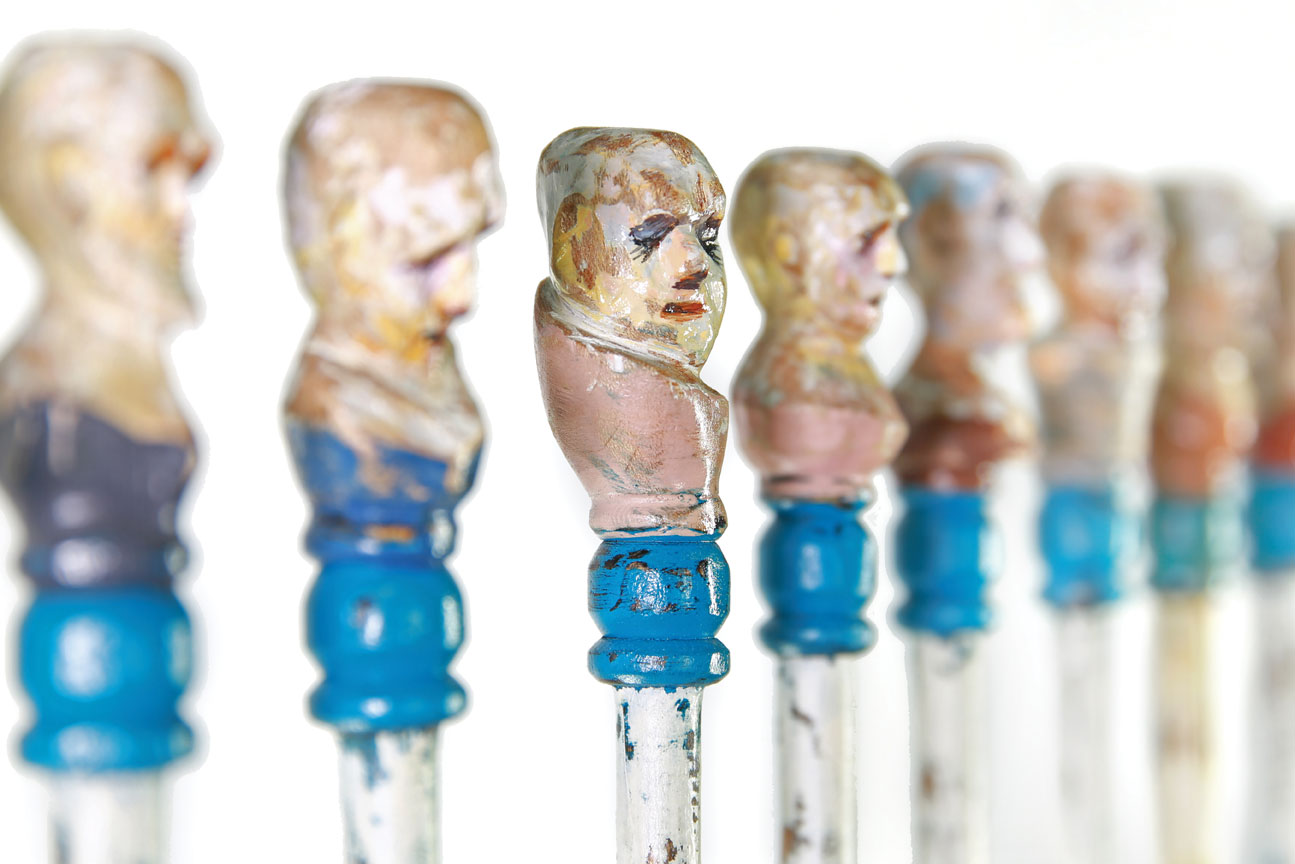 Miami-based Ernesto Capdevila presents the exhibition “The Game” at the Carlos Albizu University gallery, which consists of a selection of works from his most recent series of sculptures. The exposition takes its title from one of the pieces on display depicting a golfer swinging at human heads instead of golf balls.

Capdevila prefers to call these works “stuff” instead of “sculptures” because they are the result of an empirical process of creation in which experimentation predominates. Born in Havana in 1970, Capdevila graduated from the Escuela Nacional de Bellas Artes “San Alejandro” with a specialization in engraving. He has become known mainly as a painter and draftsman. He demonstrates notable sensitivity and technical mastery in works through which he has constructed his own visual language that, among other influences, is inspired by Gothic art, Renaissance painting and Surrealism. However, to create the three-dimensional pieces on display today, he has decided to eschew the tethers that can come from academic training and mastery of a craft. 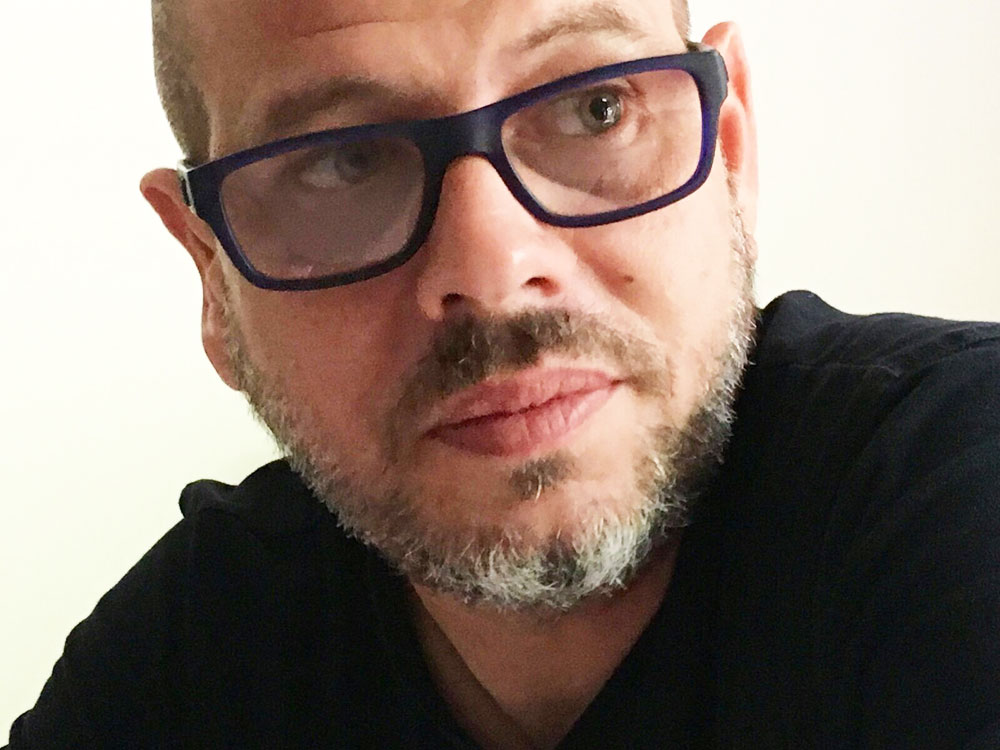 He has preferred to leave everything to chance, to learn, to discover the potential of the wood as he works with it. He started by experimenting with furniture he acquired in Miami’s thrift stores. He analyzed the form of the furniture fragment and, from there, was able to obtain a heart, a torso, an arm and a human face. The works that comprise the “stuff” represent complete figures for the first time. He gathers fragments, carves them, transforms them and assembles them to create a form reminiscent of depictions of the Catholic saints of the Middle Ages, figures with rough surfaces, carved by artisans who, like Capdevila, also learned sculpting techniques empirically. 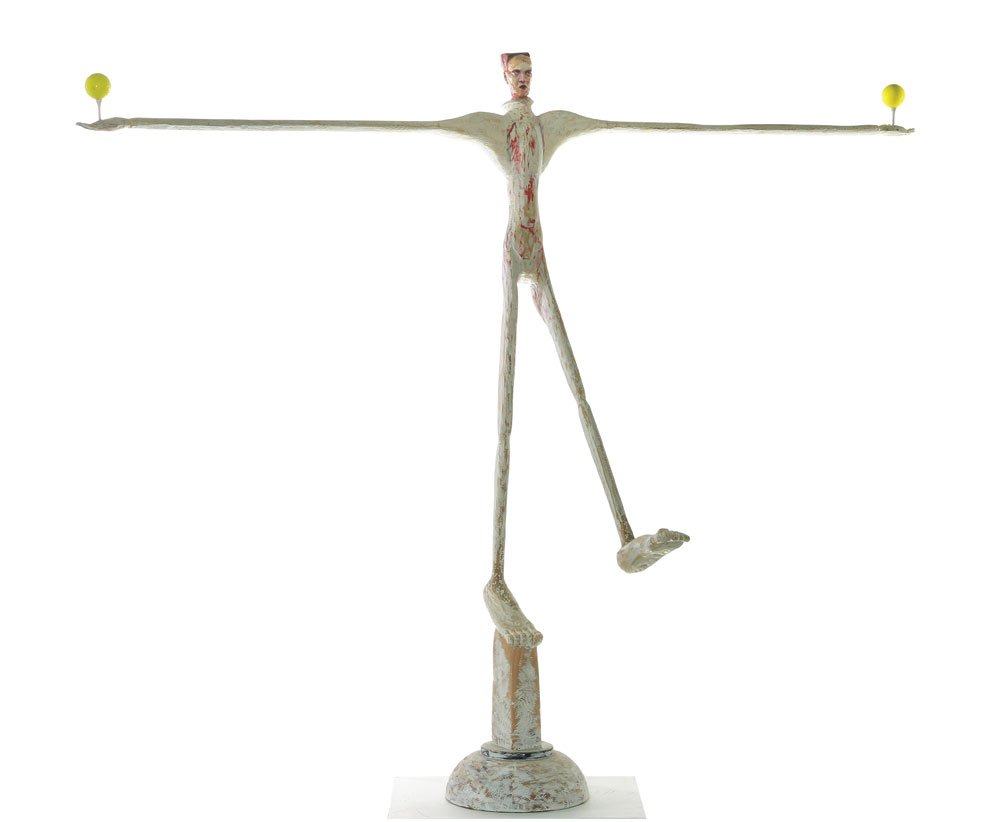 The selection of furniture parts as a starting point for these works is not accidental. Furniture is a temporary-use item that responds to a need for consumption guided by fashion. Capdevila rescues discards and gives them a “second chance” by ascribing a spiritual and aesthetic value to them. In this way, he reinserts them into the consumption chain, this time in the form of a work of art. 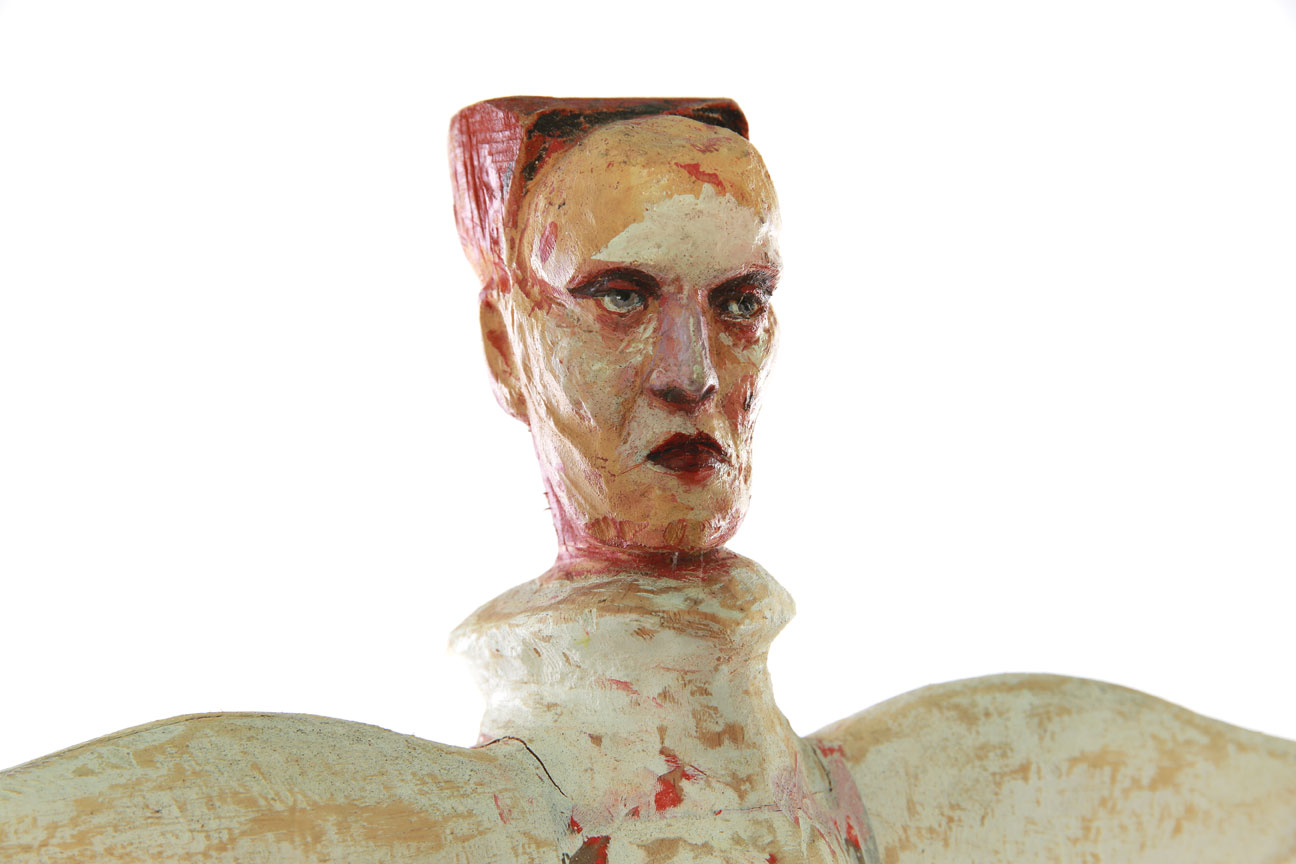 To utilize an object is to interpret it. The Duchampian gesture of starting with an object made by others displaces difficulties in the creative process, placing the emphasis on the way the artist looks at the object in question. In this way, the mere act of selection is enough to give rise to an artistic act, which is as valid as the traditional act of painting a picture or carving a sculpture. Repurposing an object is already a means of creation. The act of inserting said object into a new scenario, of considering it a protagonist in a new context, also represents an act of creation. However, Capdevila does not merely stop at the act of selecting parts of discarded objects in order to repurpose them as works of art; he also showcases all of the value that craftsmanship has within the creative act. Little by little, he has learned how to work with the wood; he has gotten to know the different techniques. He tries to take each step in the most artisanal way possible; he does not want to be labeled a sculptor, because he is fascinated by approaching the material without being contaminated by the aesthetic tendencies in vogue or by academic canons. Capdevila tries to adapt himself to the possibilities offered to him by the tools he knows how to use, which are only those he has within reach. Furthermore, he tries not to utilize tacks or nails to join the fragments; rather, he fits together the furniture parts in order to create these figures, complex in their very simplicity. 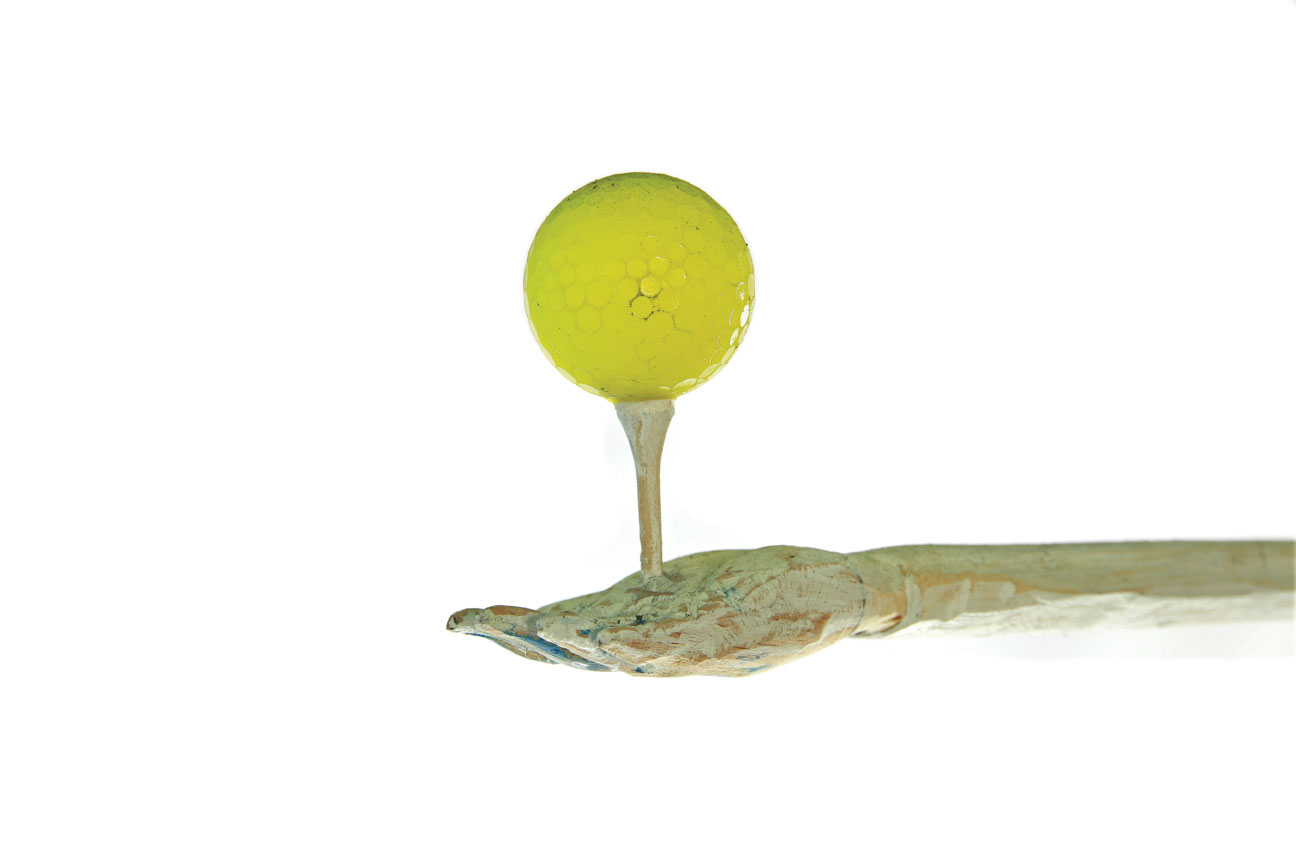 Capdevila never starts with sketches; he always starts with a fragment of furniture, and that is how he develops each step. The forms of the piece arise slowly, making the most of both the good decisions and bad. Since his early days as an engraver at El Taller Experimental de Gráfica de La Habana, he has learned to value and exploit the magic of those “accidents” that occur during the process that, far from constituting setbacks, turn into opportunities for the artist. 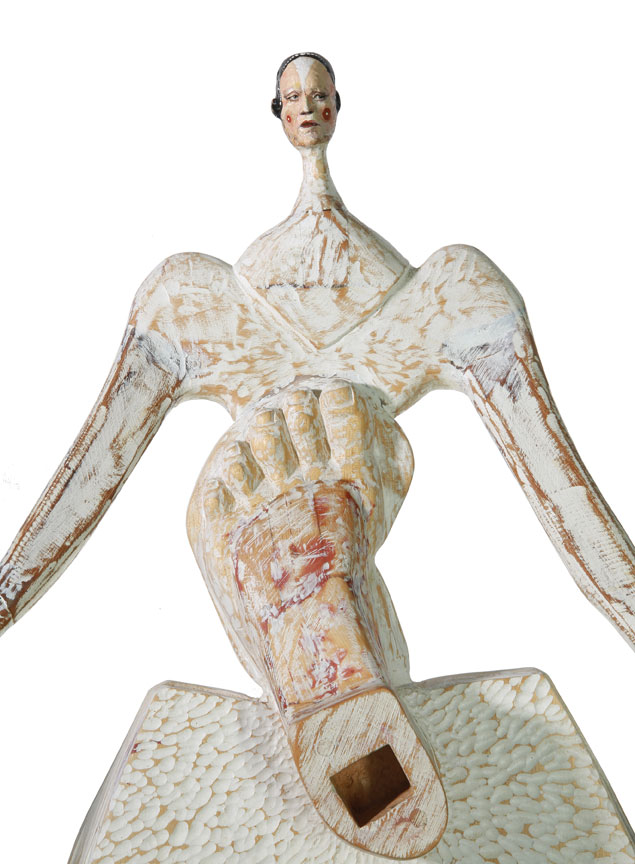 Each piece in this series has emerged with its own concept, and this in turn has generated a text that has turned into poetry. At times, the messages might appear cryptic, but they always call for reflection. “As I poetically develop a word, an idea, I begin working and creating the piece,” the artist says. In this sense, the interpretation of reality is transformed into poetic construction. The result is that Capdevila reflects and offers his opinion on themes affecting today’s world that include relationships between human beings, the relationship of man with nature, as well as his stance with respect to the mechanisms that govern art and culture. 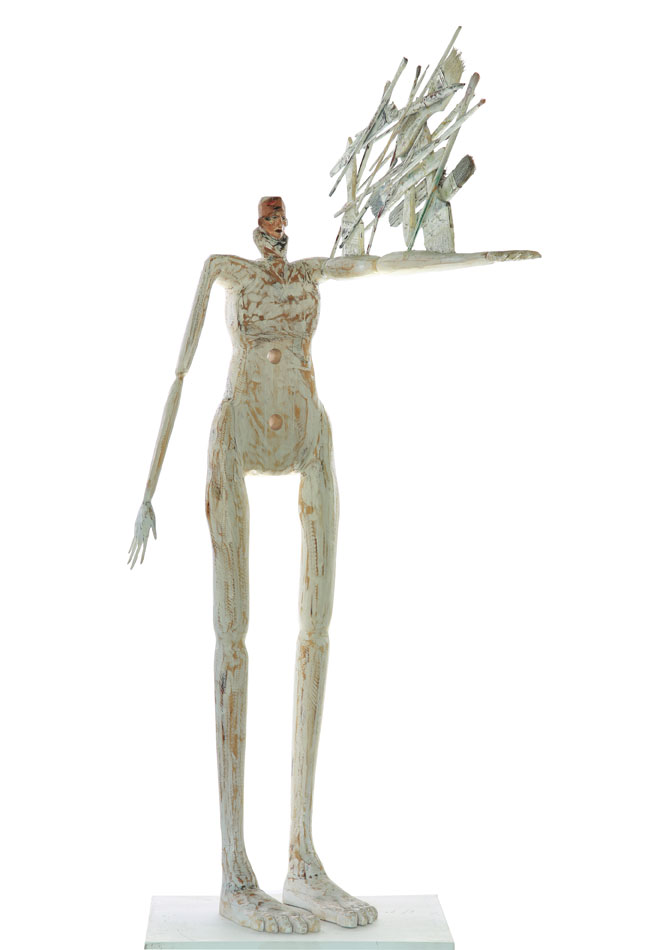 The works that comprise “The Game” are characterized as being of large and medium format, featuring figures with elongated extremities and large feet. In their creation, Capdevila concentrated mainly on the details of the faces, of the hands, of some element of clothing, leaving the rest of the body merely defined, outlined, without overworking it. Stylistically, they are reminiscent of the Gothic sculptures this artist has always valued for their apparent naiveté. There is also an undeniable reference to folk art, specifically to erotic African folk art, which he studied intensively in order to create these works, marveling at the simplicity of the forms with which those artists were able to develop and communicate such complex concepts. 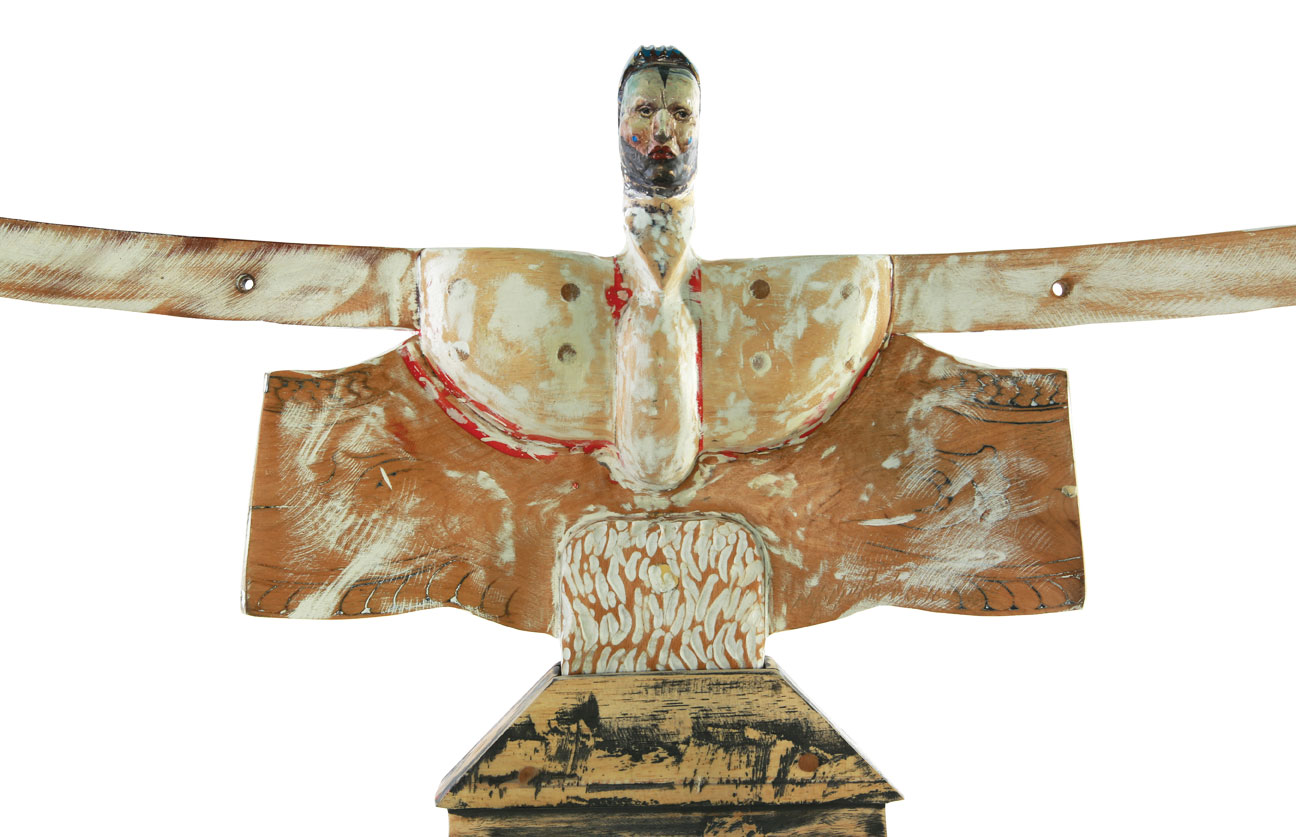 Victory is a tall sculpture with outstretched arms measuring more than 70 inches across. The torso and extremities have not been worked in detail. The artist has preferred to concentrate on the details of the two faces, one at the front and a different one at the back of the piece. “Two faces: one to show; the other to support,” proclaims the accompanying text. The work appears to communicate a paradoxical and elusive notion of victory. “What you offer me can fill my eyes, my arms and my heart” communicates the text that accompanies the work Solo veo lo que me ofreces (I only see what you offer me), which shows a character with long extremities, standing on a table, with numerous brushes clustered together on outstretched arms. “You cannot take from me what I cannot give,” says Ofrenda, a piece that shows a figure with big feet, with one of the arms outstretched, on which many brushes of different sizes are also clustered together. “You give me life, but you do not tell me what to do with it,” calls out The Monster, a sculpture inspired by the myth of Frankenstein, introduced in Mary Shelley’s Gothic novel. This was also re-created at the beginning of the 20th century in so many horror movies, for which Capdevila feels a special predilection. The Monster constitutes a reflection on the purpose of artistic creation. 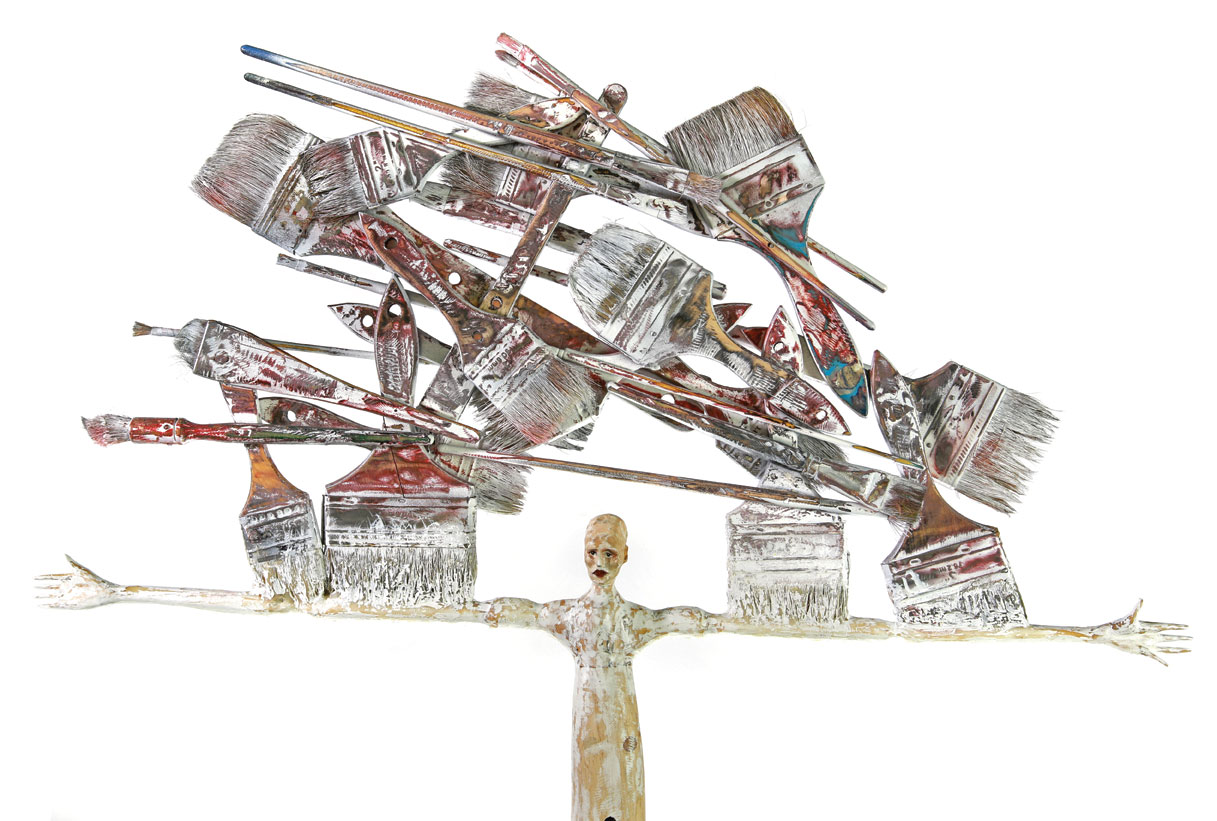 There is a message that runs through all of the pieces in “The Game”: There is always another way, another possibility, another dimension. With this collection of works, this extraordinary and multifaceted artist demonstrates his undeniable ability to analyze reality, delve into the essence of things and immortalize his observations of the world in visual metaphors.

“The Game” was organized by Carlos Albizu University in collaboration with Patricia Jimenez Art Space. The exhibition is part of the university’s cultural program, aimed at “strengthening the human spirit through education and the arts.”

Raisa Clavijo is the editor-in-chief of ARTPULSE and ARTDISTRICTS. She is an art historian, critic and curator based in Miami.

© 2010 All rights reserved.
Powered by Webnode